We got word of Harvey forming in the Gulf of Mexico early last week and began to think about what it might mean for our house in Port O’Connor, Texas.  It was just a tropical storm then or maybe even only a tropical depression but by Wednesday, they were predicting it would form into a full-on hurricane and would probably make land on Friday somewhere around Corpus Christi, Texas.  Our coast house is about a 2-hour drive from Corpus.  I told my boss on Wednesday that I probably wouldn’t be into work on Thursday because we would need to go down and put boards on the house.  We live approximately 2.5 hours from Port O’Connor.  The image below shows the red star where we live in LaVernia (la-vern-ya), the green circle is our house in Port O’Connor, and the triangle is where the full force of Harvey hit.  Prayers please for our fellow coastal friends in the wake of Harvey.  The devastation is incredible.  Houston is in the upper right corner where all the flooding is happening that you see on the news right now.  While Houston is all you see, we’re hearing that Port Aransas and Rockport were flattened.

On the way down we called other friends in LaVernia and Weimar, TX who have houses there and asked to see if they needed their boards put up as well.  Friends take care of each other in these situations.  One friend had gone down the day before and pulled the boat from the sling and parked it on high ground but still in P.O.C (as we call it).  It was becoming obvious that we really didn’t want to leave it there.  I also wanted to get the perishables out of the freezer and fridge.  Nothing worse than coming back to a fridge of rotten food.  I’ve done it and oh my,…it’s awful.  You might as well just strap it up and tow it fully closed to the dump.  It took a year to clear that out the last time it happened from a power outage and we tried to salvage the fridges.  Here’s a hint if that happens to you.  After fully power washing the refrigerator, put paper plates of high-end kitty litter on every shelf and change monthly.  It will absorb all the odors.  And yes, it takes about a year.

Now, …about the Weather Channel.  I know these guys are not only in business to report the weather but also to make money.  They also don’t want to be liable if they under-report the weather and people die as a result of their under-reporting.  I get that.  But there also has to be a balance.  We heard reports such as “Port O’Connor will be leveled”, “9 to 12-foot storm surge”, and “35 inches of rain”, none of which happened.  They did get the increased rating of hurricane correct from Category 1 to a Cat 4 but that’s because of the verified wind speeds by all the sophisticated weather equipment in the world.  I think we all need to realize that the weather forecasters report the weather in a vacuum.  They don’t know the on-the-ground conditions that the city planners have put in place to deal with enormous amounts of water that can come from a hurricane.  Heck, when we bought the place at the coast, I held the firm belief that eventually, one day, it might blow away.  We would do what we could to protect it and I would only decorate it in Early Modern WalMart, but still, one day it might be gone.  In fact, because it is a mobile home within 40 miles of the coastline, it cannot be insured for flood, wind or hurricane damage.  Fire and vandalism?  I’m covered.  I’m paying about $200 a year for that.

So Keith and I went down on Thursday and boarded up our house on a blue sky day and prepped it to prevent things from flying around.  It’s a 4 bedroom, 2 bath trailer across the street from $750,000 homes with wet slips.  🙂  Location, location right? 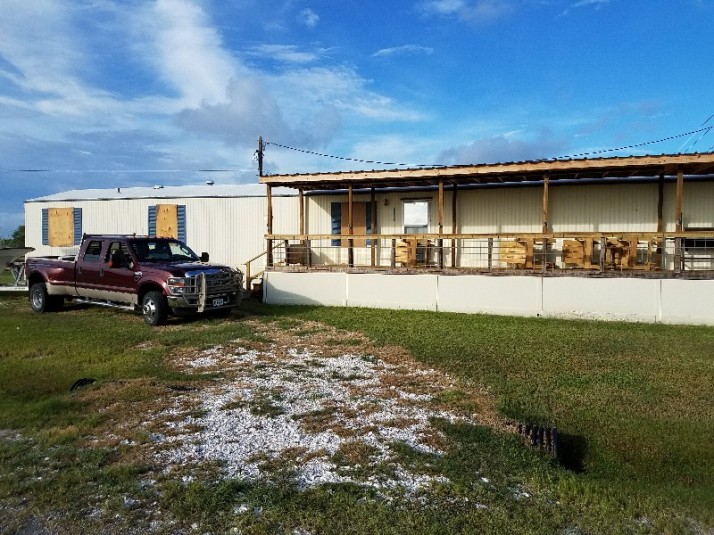 And boarded up the guy we bought our place from across the street.  It’s a two story…with 13 upstairs windows and 9 downstairs windows.  That’s the other end of my house in the background. 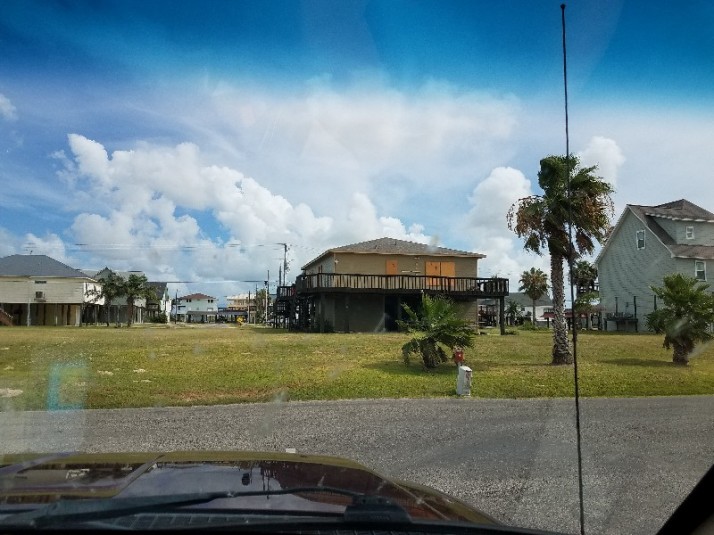 And our friend’s house a few streets over.  That’s my 3-legged dog Harley. 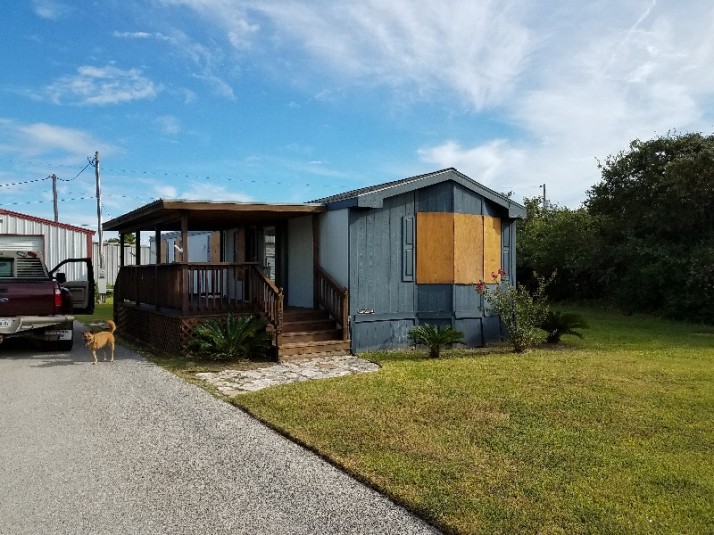 Let me tell you.  That’s some WORK!   Keith was on the ladder screwing in the boards and my job was to move the ladder and hand up the plywood to him.  All told, it was about 50 sheets of plywood.  And 13 of them had to be hauled up a flight of stairs.

Then we went and hitched up the boat from the high ground and headed home.  By the end of the day, as we say in Texas, “We were give out!”  I did bring back my sewing machine and my margarita machine too.  A girl has to have her priorities ya know!  The Honda Metropolitan scooter and family antiques?  I’ll cross my fingers.  But by golly I brought home what was important!

On Friday, Keith stayed home from work but I went in to my job in North East San Antonio.  However, we were released about noon because of the frenzy to get to the stores to buy supplies to hunker down for the impending storm.  Can I say I’ve never been so glad to be “old-school” as I am in a storm?  I like to shop at the big box stores like Sam’s and Costco so I have multiples of literally everything.  Zipper bags, foil, toilet paper and paper towels; canned veggies, soups, frozen meats, chips and bread.  My house is stocked like a prepper!  Not because I am a prepper mind you, but because my mother is from Wisconsin and there was never an empty shelf in the basement pantry.  She froze everything and always bought or made things in quantity.  It was helpful in my early years when the electricity went out every time a cloud passed over but I really have no excuse now.  I just can’t help myself.  Keith is from Kansas and grew up with tornados so we’re pretty compatible in that sense.  Good thing too, because the grocery stores had empty shelves.  The only thing I really needed was beer. 🙂   Come to find out, hurricanes and cookies go hand-in-hand.  The cookie and chip isles were empty and there wasn’t a can of Spaghettio’s or a box of Kraft Macaroni & Cheese to be found.  I guess people need comfort food in a disaster ya know?

We sat outside on Friday evening under the car port and watched the weather on the TV hooked to the RV.    Once it started seriously raining, we went in.  It is Sunday evening as I write this and it hasn’t quit raining since Friday night.  I’m SO grateful I’m a quilter/seamstress!  I had a ton of projects to keep me busy all weekend.  Keith however is a different story.  He can’t go to the ranch or even piddle around outside.  Even though we never lost power, we lost Dish Network cable on Friday night because the dish got shoved around by the wind.  Finally, on Sunday afternoon, he broke out an old-school antenna to hook to the TV and can now get local stations.  I had bought that antennae to put up at the house at the coast but one day Keith found some Dish guys on another job and paid them cash to run cable in the house so the antennae has been under the pool table here at home for months.  Good thing huh?  At least now he can watch TV.  This rain is strange.  No thunder, no lightening, but just a steady downfall of a what I’d call a soaking rain for the past 30 hours.  The wind felled two 50 foot trees in our backyard and has left the entire yard, front-and-back, in a total mess.  My pool is a disaster.   And even though I lost two trees, you can’t tell.  There’s another 40 back there to make up for them. 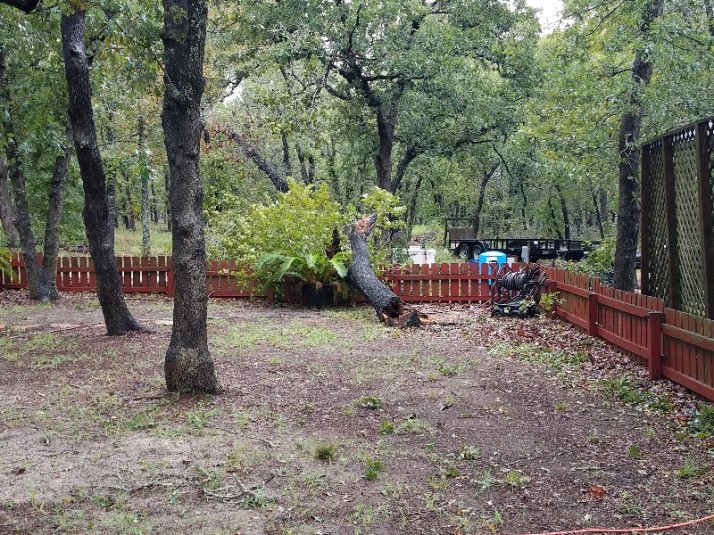 On Saturday there wasn’t much to do.  We actually pulled out some lawn chairs and sat on the front porch of our house for the first time in the 11 years that we’ve owned the place because we had the house itself to block the wind and rain.  Keith likes his cigars so we hung out outside with the dogs, drank a case of beer, and watched the trees blow around.

On a bright note, I got a call from my State Farm agent to check on me and to remind me that my trailer at the coast isn’t covered for flood or hurricane.  Gee thanks.  But she was happy we were high and dry.  How nice.  Good ol’ State Farm.  Like a Good Neighbor…

Update – Monday evening.  We’ve had updates from those hardy few who stuck it out in Port O’Connor and there was about a 2.5 foot storm surge.   There’s my yellow trailer on the left.  Look at all that water.  That’s nothing in Port O’Connor.  That little fishing village is ready for it and handled it like a champ.

The floor of my house is about 5.5 feet off the ground so it seems there was no interior flooding thank goodness.  We did lose a board off the master bedroom window which is double paned.  The exterior pane broke and bent the frame but the interior pane held so there wasn’t major water damage I don’t think.  The power has been off since last Friday so I’m glad when we went down we grabbed all the perishables.  They don’t think it will be back on until Wednesday.  At least my bill will be less for August.

Keith and I spent this evening cleaning up the yard.  He cut up one of the felled trees that fell over the neighbor’s fence with his chain saw and I took a big rake to the yard.  I live on an acre and a half so it’s a lot of yard.  I managed to clean up one half of the back yard and we tossed all the tree branches back onto our side of the fence that fell in the neighbor’s yard.  I’m going to have Popeye shoulders if I keep all this heavy outdoor work up.

So that’s my Hurricane Harvey update.  More to come if anything else happens.  We plan to go down on Thursday night or Friday unless the power isn’t back on.  This girl isn’t going to do without air conditioning! 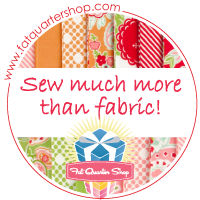 google772ff44ff7c79a61.html
Power Tools with Thread
My Love Affair With Sewing

"Go to the people of all nations and make them my disciples. Baptize them in the name of the Father, the Son and the Holy Spirit, and teach them to do everything I have told you." - Matthew 28:19-20 (CEV)